Being an Exceptional DBA Award 2011 Finalist

On Wednesday 13th July at 16:06 (GMT) I got what could only be described as the biggest shock of my 31 years on this planet – an email from the Exceptional DBA Awards 2011 saying that I’d made it as one of the final five! To say it’s an honour is an understatement, especially as this award is open worldwide and looking at some of the previous finalists I knew the level of competition is always very high.

Being nominated by one of my peers was unexpected and to be honest I wasn’t going to go through the process to complete the application but I’m so glad I did. More importantly (to me), is the fact that in order to be a finalist you need to be chosen by the expert judging panel who are all highly respected members of the SQL community, and to actually get through their vetting is a phenomenal achievement which I thank them for greatly.

So, what’s next? Judging by the high calibre of the 4 other finalists, winning the award will be virtually impossible. Being (as far as I’m aware) the only UK based finalist may make things that little bit tougher for me but I’d love to be the first UK winner of the award and ultimately make the trip to Seattle in October. It’s a long way to travel for what my wife would call a Geek Conference, to be honest though, this is a once in a lifetime opportunity and SQLPass is always something I’ve wanted to attend but due to client commitments I’ve never been able to make the jump over the “pond”.

Following the words of 2008’s winner Dan McClain “It brings another level of ‘wow’ to my resume, like having a special certification”, and that is exactly what being a finalist has done for me – even if I don’t win, it’s still an outstanding achievement and something I’m very proud and will be for a very long time.
So, what do you have to do in order to make me the first UK based winner of the Exceptional DBA Awards? Simply click this link and “Vote for Chris>>” – it’s that simple. No registration or forms to fill out and remember, every vote counts!! If I win and make it to SQLPass, I’d appreciate everyone to give me a shout and have a few beers. For those of you UK based, I’ll no doubt see you at the next SQL UG in Manchester and/or Leeds.

Good luck to Jeff, Colin, Scott and Tim and hopefully see everyone in October. 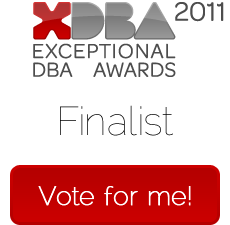 One thought on “Being an Exceptional DBA Award 2011 Finalist”